Feminism And The Queer Movement Both Create The Same Harm 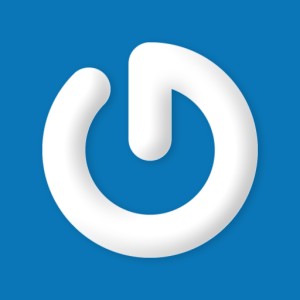 The perversion of God’s created order is always their point.

The following is adapted from a tweet thread from Pastor Shawn Mathis concerning Christians normalizing the liberal arguments of androgyny leading to the normalizing of gayness. It was prompted by yet another worldly take from a “progressive christian,” writer and editor, Timothy Cho.

Pastor Mathis has a forthcoming book on this topic: Is the Church Pro-Gay?

This is not Biblical nor Reformed or historical Protestantism. It is dangerous.

At the very least, that’s going to make many of our deeply held gender norms and expectations uncomfortable.” 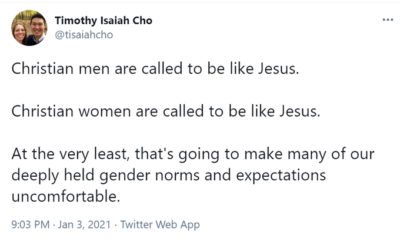 Notice the implied contrast between grace and nature.

True godliness transcends natural categories we are told. But, instead of saying that outright, vague “expectations” are attacked.

Can “expectations” ever be right?

“Many of the gender norms and expectations that are held as “gospel” in American Evangelicalism are either not found in Scripture or are entirely contrary to Christian ethics.

To the great damage of discipleship, women and men in American Evangelicalism are often forced to fit and despair.

We need to begin to re-offer an understanding of gender and sex as Christo-centric rather than culturo-centric. That is where people will find themselves in the fullness of the diversity of what God has created women and men to be.”

The vagueness hides a hidden premise that comes to light at the end of the thread:

Who has ever heard of “Christo-centric” sex and gender!?

Do Christians reproduce differently than unbelievers?

No, rather this seems to be a way to “liberate” women without calling it “liberating women.”

The odds are that the new “Christo-centric” gender roles conforms closer to the spirit of the age than the age-old, tried-and-true roles.

Cho reveals as he continued:

…Christian men and women are expected to look a certain way.

Many Christian women and men often find themselves isolated and despairing about the fact that they don’t fit into their predetermined molds. Many begin to think that they must be a failure as a Christian man/woman and they find a different narrative outside of Christianity to best explain who they are as a person. They feel as though they need a liberation from the shackles of Christianity they experienced in order to find out who they really are in a way the dignifies them. Where they should have found true dignity, they found shame…” 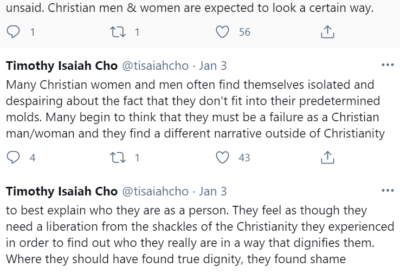 If grace transforms natural gender and sex roles, then it transforms the families and children and society.

Yet Paul does not change the natural roles but reinforces them—both the husband and wife and child and helping the widows, etc.

But if a widow has children or grandchildren, let them first learn to show godliness to their own household and to make some return to their parents, for this is pleasing in the sight of God. —1 Timothy 5:4

Wives, submit to your own husbands, as to the Lord. —Ephesians 5:22

Children, obey your parents in the Lord, for this is right. —Ephesians 6:1

Notice how the focus is on women.

But, if grace transforms nature and loosens our roles from cultural restrictions, then effeminate men in the church is okay.

As proof of “diversity” and divestment from “culturo-centric” practices, effeminate and gay men would be mandated.

Does not nature itself teach you that if a man wears long hair it is a disgrace for him, but if a woman has long hair, it is her glory? —1 Corinthians 11:4-5

Note: No one seems to ever tie “culturo-centric” practices to the Fifth Commandment.

“Tradition” is not a dirty word in historic Protestantism.

In fact, if we want to stop the implosion of families and sex and gender roles, we need to stand more firm in much of our tradition.

In any case, let us learn that where there is an accepted custom, and it is a good and decent one, we must accept it. And whoever tries to change it is surely the enemy of the common good, and should be held in abomination, and pointed out as a trouble maker. —John Calvin

In the end, we see that feminism and the queer movement both create the same harm. 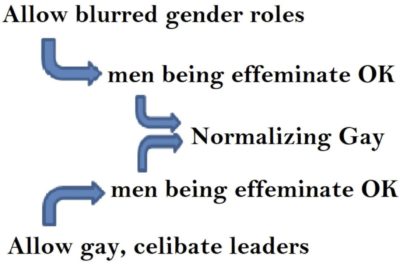 Grace versus nature. This is not Biblical nor Reformed or historical Protestantism.

Pastor Shawn Mathis grew up in Colorado. A few years after telling his ex-Air Force father he would never join the military, he joined the Air Force in 1990. This experience plus a wonderful marriage, strong church and six years of college and seminary finally matured him enough to write. He has studied and written about education, homeschooling and the family integrated church movement for several years. He homeschools, teaches at a homeschool cooperative and writes as the Denver Christian Perspectives Examiner at Examiner.com. He is the pastor at Providence Presbyterian Church (OPC) in Denver.
All Posts