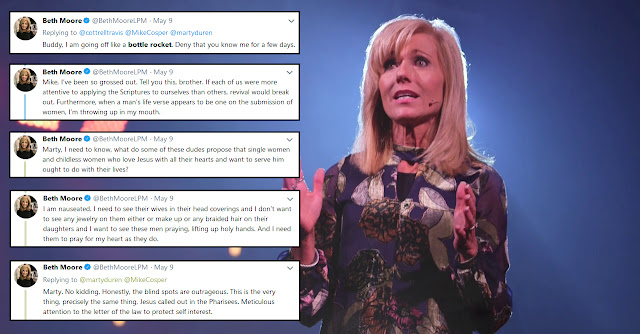 Yesterday, Beth Moore went “off like a bottle rocket.” Her words. What was the thing that set her off? An article by Dr. Owen Strachan of Midwestern Baptist Theological Seminary, in which he argued from Scripture that God has appointed men to be the overseers of the preaching and teaching in the church, a role He has not granted to women.

Pastors are to be men—tested, approved, and qualified according to Scripture. The Spirit of God is clear that women are not to have teaching authority over the men in the church (1 Timothy 2:11-12) pointing to the order of creation (v.13-14) and the Law (1 Corinthians 14:34-35). This applies to all people, in all cultures, at all times.

Lest that develop into any feelings of superiority, to be a pastor is to be a servant. In fact, it’s to be a servant of servants. Jesus said to His disciples, “If anyone would be first, he must be last of all and servant of all” (Mark 9:35). Again, He said, “If I then, your Lord and teacher, have washed your feet, you also ought to wash one another’s feet. For I have given you an example, that you also should do just as I have done to you” (John 13:14-15). As He said to Peter, “Feed my sheep” (John 22:17).

This is not a fight for the best seat at the table. A pastor must serve. The primary role in that service is to oversee the preaching and teaching in the church. Of course, all men and women in the church are called to serve. Women can even teach. Get this: they are commanded to teach! (See Titus 2:3-5.) But that doesn’t mean you hand them the pulpit. God has ordained specifically men for the role of pastor. On this point the Bible is unequivocally clear—from creation to Law to living in the new covenant.

Oh, but Beth Moore will have none of that. In a response to Dr. Strachan on Twitter of all places, Mrs. Moore openly stated the following:

Owen, I am going to say this with as much respect & as much self restraint as I can possibly muster. I would be terrified to be a woman you’d approve of. And I would have wasted 40 years of my life encouraging women to come to know and love Jesus through the study of Scripture.

One wonders what she would have said if she wasn’t exercising self-restraint! Beth Moore is “terrified to be a woman you’d approve of.” What an insult to Dr. Strachan’s wife. Contrary to Beth’s overreaction, Dr. Strachan was not telling Mrs. Moore women can’t teach women. Strachan would praise such an effort (if what Beth Moore was teaching was actually sound doctrine). He was saying what the Bible says: women can’t be pastors teaching in the congregation of the church proper.

Like I said, Beth went off like bottle rocket, and there was an overflow of comments beyond that one. To Mike Cosper of Harbor Media, she said:

Mike, I’ve been so grossed out. Tell you this, brother. If each of us were more attentive to applying the Scriptures to ourselves than others, revival would break out. Furthermore, when a man’s life verse appears to be one of the submission of women, I’m throwing up in my mouth.

Beth is “grossed out”? As if Dr. Strachan is some kind of pervert? So much for all that self-restraint she was exercising. She said, “If each of us were more attentive to applying the Scriptures to ourselves than others.” Oh, the irony. Everyone else has to apply the Scriptures to themselves, but she doesn’t have to apply it to herself.

By the way, in case I forgot to tell you, Beth Moore is preaching in front of her church congregation this Sunday. To a concerned supporter who asked Beth if her ego was getting in the way, Beth replied:

I have brought a message from a pulpit in an SBC church service about 15 times in 40 years. If your track record of “obedience” tops that, more power to you. This is over me speaking at an SBC church on MOTHER’S DAY.

As Michelle Lesley pointed out, “This is like saying, ‘I’ve only committed adultery or lied or coveted or slandered or murdered or gotten drunk 15 times in 40 years.’ This is sin. And we don’t boast about how few times we’ve sinned and how obedient we are for it, we grieve over how many times we’ve sinned, and we repent!”

Further in her rocket rant, Beth said to Marty Duren at Lifeway:

Marty, I need to know, what do some of these dudes propose that single women and childless women who love Jesus with all their hearts and want to serve him ought to do with their lives?

Hysterically, Beth argued that single Christian women have nothing to do if they’re not allowed to become pastors. Beth reiterated again that she’s about to spew:

I am nauseated. I need to see their wives in their head coverings and I don’t want to see any jewelry on them either or make up or any braided hair on their daughters and I want to see these men praying, lifting up holy hands. And I need them to pray for my heart as they do.

And she’s a Bible teacher? That terrible exegesis alone would be enough to disqualify her. I said in a recent video that Beth makes the Bible about you. Well, I’d like to take that back—apparently she makes it about herself. If you think I can’t be a pastor, she says, you better be making your wife wear head coverings and don’t let your daughter braid her hair. You take the Bible too literally, and that makes you a pharisee. She said:

Marty. No kidding. Honestly, the blind spots are outrageous. This is the very thing, precisely the same thing, Jesus called out in the Pharisees. Meticulous attention to the letter of the law to protect self interest.

So a moment ago, we needed to be more attentive to applying the Scriptures to ourselves. Now meticulous attention to Scripture is Pharisaical. Which is it? The problem with the Pharisees wasn’t “meticulous attention to the letter of the law.” They didn’t understand the law and added to the law. Again, how does anyone consider this woman a credible Bible teacher?

The only correct thing she said in her online rant yesterday was that she was going off like a bottle rocket. She’s just whipping through the air with no direction or grounding. Dr. Strachan based his teaching on Scripture, in a gentle and loving manner. Beth Moore responded like a petulant teenage girl putting her finger down her throat and making throw-up sounds. Accusing Dr. Strachan or anyone else who believes as he believes that they’re only trying “to protect self-interest” is slander. She’s claiming she knows their motivation, and it’s not a deep love for the word of Christ.

As for protecting self-interest, Beth again needs to examine herself. She’s one of the most bankable evangelical women celebrities. Joyce Meyer and Victoria Osteen might be the only names bigger than hers. Beth has her brand to protect. Between her and Dr. Strachan, she’s got way more to lose and was definitely more unsettled, considering how “terrified,” “grossed out,” and “nauseated” she became. The reason Beth is terrified might be because she knows she’s deliberately disobeying God.

The Apostle John wrote, “God is love, and whoever abides in love abides in God, and God abides in him. By this is love perfected with us, so that we may have confidence on the day of judgment, because as He is so also are we in this world. There is no fear in love, but perfect love casts out fear. For fear has to do with punishment, and whoever fears has not been perfected in love” (1 John 4:16-18).

Abiding in God means that we abide in His word. Jesus said, “If you abide in my word, you are truly my disciples. And you will know the truth, and the truth will set you free” (John 8:31-32). He said, “If you love me, you will keep my commandments… If you abide in me, and my words abide in you, ask whatever you wish, and it will be done for you. By this my Father is glorified, that you bear much fruit and so prove to be my disciples” (John 14:15, 15:7-8).

Is Beth “terrified” because she knows that she is not abiding in the word of Christ, a twister of the word to serve her own self-interests? I suggest she examine herself and repent, lest something worse happen to her than an article by a seminary professor. In the meantime, Beth Moore has fully revealed herself to be in opposition to God’s word. Of teachers who stray from sound doctrine, the Spirit warns:

If anyone teaches a different doctrine and does not agree with the sound words of our Lord Jesus Christ and the teaching that accords with godliness, he is puffed up with conceit and understands nothing. He has an unhealthy craving for controversy and for quarrels about words, which produce envy, dissension, slander, evil suspicions, and constant friction among people who are depraved in mind and deprived of the truth, imagining that godliness is a means of gain. (1 Timothy 6:3-5)

Apply this passage this way: Avoid teachers that go off like bottle rockets.

Extra resources:
Why Your Pastor Should Say No More to Beth Moore by Josh Buice
Why We Still Warn Against Beth Moore by Justin Bullington
Should Women Preach in Church? (video) by Albert Mohler

Edit: The “Mother’s Day” tweet and Michelle Lesley’s follow-up comment were a later edition not included in the first draft of this blog.

Gabe is pastor at First Baptist Church in Lindale, TX. Prior to becoming a pastor, he was in radio for 22 years, most of that time in Christian radio. Gabe is also the voice of When We Understand the Text, an online Bible ministry with hundreds of videos that have been viewed tens of millions of times worldwide. Find these videos as well as his daily Bible-teaching podcast at wwutt.com.