Perhaps you heard the sound of a massive creaking ship rocking the online community, and you turned in your boat to see a commotion aboard the U.S.S. Southern Baptist Convention. That’s because on Monday, the Pastors Conference, which precedes the annual convention held in June, announced the line-up of speakers who would be addressing the ministers attending this year’s event in Orlando. And that line-up is a mess, to say the least.

The headlining name at the top of the announcement from the Baptist Press is bestselling author Wayne Cordeiro, pastor of New Hope Christian Fellowship in Honolulu. Not only is Cordeiro not a Southern Baptist, he’s not even sound. He’s a pastor in a Foursquare church, a pentecostal denomination founded by heretic and con-artist Aimee Semple McPherson.

Cordeiro is cut from the same cloth as Joel Osteen, Joseph Prince, and Joyce Meyer. He’s a prosperity preaching motivational speaker disguised as a pastor who wants you to live Your Best Life Now. Cordeiro preaches things like “Jesus came as a dream releaser,” and “nothing can rival the power” of the dream God has given you. But, “unless that potential is recognized and released, it remains richly unproductive.” (Quotes taken from the first few pages of his book Dream Releasers.)

Cordeiro’s church has a pastor on staff who’s a woman, Cyndi Burgess. The SBC statement of faith, the Baptist Faith and Message 2000, states, “While both men and women are gifted for service in the church, the office of pastors is limited to men as qualified by Scripture.” So Cordeiro’s church could not be part of the Southern Baptist denomination, operating contrary to clear commands of Scripture. Yet this man is listed as the headlining name preaching to Southern Baptist ministers?

Furthermore, the list of speakers includes Hosanna Wong, a “spoken word artist” who “will perform” some kind of poetry performance backed by music. Wong has the title of “teaching pastor” at EastLake Church in San Diego. This woman does ministry in willful disobedience against God’s word. She’s unqualified even according to our Baptist statement of faith. And yet she’s being invited to address pastors at a Southern Baptist event?

Now, when I raised this concern on Twitter yesterday, I heard from about a dozen people who said something to the effect of, “Hosanna is a spoken word artist. She will be speaking as in a performance; she will not be preaching as a pastor.” Setting aside whatever qualifies as a “spoken word” performance and what place it has at a pastor’s conference, that doesn’t matter. She thinks she’s a pastor. Her church says she’s a pastor. The Bible says she’s not.

In the last couple of years, a segment of Southern Baptists (myself included) have been saying that the powers-that-be are attempting to sneak in egalitarianism, the liberal progressive idea that a woman has just as much right to the pulpit as a man. These leaders might assure us they’re committed complementarians, but then they give pastoral platforms to someone like Beth Moore, who has aggressively challenged complementarianism and called herself a soft complementarian (which means she’s a soft egalitarian).

Lo and behold, the Pastors Conference committee is platforming a woman who is an ordained minister and calls herself a pastor, justifying the concern that egalitarianism is spreading. When asked about Wong, David Uth, the Pastors Conference President, told the Baptist Press, “She’s not preaching. She’s not coming as a preacher. She’s coming as a musical artist.” That makes it okay? Why not make Nadia Bolz-Weber the host? I mean, as long as she’s not preaching…

Also on the docket for the Pastors Conference, is Jim Cymbala, pastor of the famed Brooklyn Tabernacle in New York City. The Brooklyn Tabernacle believes in an unbiblical second baptism of the Holy Spirit and mentions it in their statement of faith. Phil Wickham is leading worship, and I’ve warned elsewhere that Wickham is associated with the heretical Bethel Church in Redding, CA. Even Albert Mohler, president of The Southern Baptist Theological Seminary, has said Bethel Church, who held a week-long dead-raising ceremony a couple months ago, is not a church at all.

But hang on, we’re not done…

One of the speakers is also David Hughes (no relation), senior pastor of Church by the Glades in Coral Springs, FL (David’s wife is also regarded as a pastor there). Chris Rosebrough of Pirate Christian Radio has been warning for years about the idolatry in this church, lacking any clear preaching of the gospel. About four years ago, Church by the Glades featured a Storm Trooper dance with people on stage dressed as Star Wars characters doing crotch-thrusts to Don’t Stop ‘Til You Get Enough by Michael Jackson.

This church has also featured their worship leaders (??) doing covers of songs by Katy Perry, Beyoncé, and Britney Spears. The Spears song that I saw was Circus, with lyrics like “Well baby, I’m a put-on-a-show kind a girl,” and “When I crack that whip, everybody goin’ trip.” The performance put on by Church by the Glades was every bit as provocative as it sounds. Here are actual photos of how they “sell” their church… 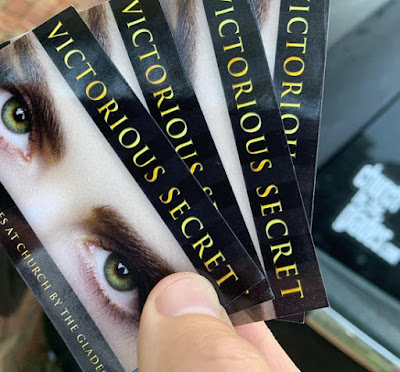 This image was shared just yesterday by David Hughes on his Instagram account. These are the invitations they hand out to attend Church by the Glades, using sexually alluring advertising to share a “Victorious Secret” (this is of course a play off of the lingerie giant Victoria’s Secret). 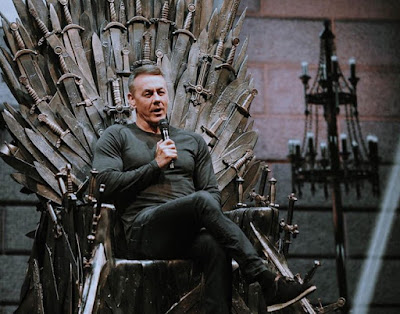 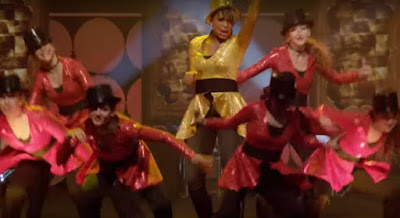 Here’s a still from their performance of Circus, complete with hip-spinning and all of its sexually suggestive lyrics. There were jugglers and clowns all around the stage during this show, giving credence to Charles Spurgeon when he said, “A time will come when instead of shepherds feeding the sheep, the church will have clowns entertaining the goats.”

If you will recall, the issue that received the most attention at last year’s Southern Baptist annual convention was the sex abuse crisis in the denomination, a story broken publicly by the Houston Chronicle in February. I have pointed out that the seriousness of this issue has not been helped by our convention president, J.D. Greear, who preached to his church, “The Bible whispers about sexual sin.” How can we consistently confront such wicked depravity and effectively encourage hurting victims when the SBC president preaches things like that?

And yet one year after the news broke about a sex abuse crisis in many Southern Baptist churches, here we are heading to Orlando, FL, and platforming pastors who use sex to attract the unconverted and entertain believers. The inconsistent message continues. Have we learned nothing since last year? The Bible most certainly does not whisper about sexual sin, but apparently the Southern Baptist Convention does.

As I wrote about in my book 2019 Year in Review, this sex abuse crisis exists, in Southern Baptist churches and other denominations, because of an ongoing affair with pragmatism. Rather than embracing the gospel and promoting the teaching of sound biblical doctrine, Southern Baptists at large, like most American churches, determine truth through that which is practically applicable or meaningful. Those things that aren’t relevant get rejected.

Some pragmatism can be helpful as a matter of common sense. If your car is making a funny sound, you replace the fan belt, and suddenly your car isn’t making that sound anymore, it’s reasonable to assume that a faulty fan belt was the problem. That’s pragmatism. But where pragmatism is not helpful is when it becomes the guiding principle of morality, mortality, and ministry. For that we need the absolute and unadulterated truth of God’s Word.

The Apostle Paul says, “While bodily training is of some value, godliness is of value in every way, as it holds promise for the present life and also for the life to come.” This is right after Paul has said, “Have nothing to do with irreverent, silly myths. Rather, train yourself for godliness” (1 Timothy 4:7-8). He went on to say, “If anyone teaches a different doctrine and does not agree with the sound words of our Lord Jesus Christ and the teaching that accords with godliness, he is puffed up with conceit and understands nothing” (1 Timothy 6:3-4).

What the Church by the Glades is doing is irreverent, silly pragmatism. They are not preaching the sound words of our Lord. As has long been said by men much wiser than I am, if you use carnal means to get people in your church, it takes carnal means to keep them there. You are entertaining the flesh—you are not piercing the soul with the truth about sin, judgment, repentance, and the life-saving good news of the gospel. That piercing is done with the sword of the Spirit, which is the Word of God (Psalm 149:6, Ephesians 6:17, Hebrews 4:12, Revelation 1:16).

I do not think Church of the Glades is an anomaly. I think they represent the largest chunk of the denomination. Steven Furtick, whose Elevation Church is, believe it or not, Southern Baptist, is just like David Hughes. Furtick has platformed prosperity heretics and women preachers, too, all to titillating spectacle. Oh, look! Steven Furtick has preached at Church of the Glades! Why am I not surprised… 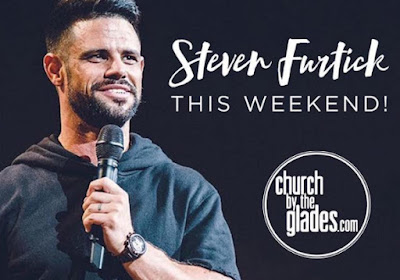 Why was David Hughes invited to speak to the Pastors Conference? Because a lot of the pastors attending want to be just like David Hughes. Or Steven Furtick. Or Andy Stanley. Or Ed Young Jr. Or Beth Moore. Or Bethel Church. They’re pragmatists.

Things like Resolution 9, Beth Moore and the rise of egalitarianism, a lack of church discipline, the opposition to reformed doctrine, topical preaching over expository preaching, and even the sex abuse crisis may look like separate issues, but they have all grown from the same rotten root. The Southern Baptist denomination must make our highest concern the preaching of the true gospel of Jesus Christ and “the stewardship from God that is by faith,” for “certain persons, by swerving from these, have wandered away into vain discussion” (1 Timothy 1:4-6).

If the Southern Baptist Convention doesn’t right the ship, and soon, it will be dashed against the rocks and “make a shipwreck of their faith” (1 Timothy 1:16). And it should be wrecked, if a spirit of repentance doesn’t come swiftly upon its officers and its crew.

EDIT: When the blog was first published, the title was “What in the Wide World is Going On with the Southern Baptist Convention?” I changed “Convention” to “Church,” and under advisement, I have changed it back to “Convention.” I hope that’s not too confusing 🙂

CORRECTION: While Steven Furtick did receive his M.Div. from Southern Baptist Theological Seminary, it appears as if he and Elevation Church are no longer part of the Southern Baptist Convention, though they were at one point.

Previous Post: « I Support the Death Penalty Because All Lives Matter
Next Post: 10 Signs You May Soon Be Leaving Your Church »