In his famous A Faithful Narrative of the Surprising Work of God (1737), Jonathan Edwards took stock of the revival that blazed through Northampton and its neighboring villages in 1734-35. In conversion accounts such as those told by Abigail Hutchinson and Phebe Bartlet, the Northampton pastor found great encouragement from the local awakening. However, he also discovered that this outpouring of the Spirit looked differently for different people: “There is a vast difference, as observed, in the degree, and also in the particular manner, of persons’ experiences, both at and after conversion, some have grace working more sensibly in one way, others in another. Some speak more fully of a conviction of the justice of God in their condemnation; others, more of their consenting to the way of salvation by Christ; and some, more of the actings of love to God and Christ.” In many ways, A Faithful Narrative is evidence of Edwards’ departure from classic Puritan faculty psychology.

In establishing their “precise” religion, Puritans had developed a trans-Atlantic fixation with conversion that transcended that of their Reformation forbears. Unlike Calvin himself who rarely discussed the theme of conversion explicitly, Puritans transformed it into a science. An exact science. For instance, William Perkins’ A Golden Chaine (1591) was instrumental in introducing the notion of an “ordo salutis.” His pupil William Ames’ Medulla Sacrae Theologiae (1623) and De Conscientia (1630) were standard textbooks in New England, reflecting the systematization of conversion. After hearing stories from his local parishioners, however, Edwards was hesitant to paint a one-size-fits-all picture of the conversion experience.

Nevertheless, while Edwards was unwilling after the awakenings to draw an inflexible map of conversion, John H. Ball III (and Perry Miller) insists that the American theologian did not depart completely from Puritan conversion psychology. (Chronicling the Soul’s Windings, 93) Edwards was still very much a scientist of conversion. While Connecticut River Puritans before him like Thomas Hooker had emphasized the role of the will in conversion, Edwards, like Calvin, had accentuated the mind in a unique way. While he conceded that “all virtue and religion have their seat more immediately in the will,” he also believed that “the will always follows the last dictate of the understanding.” (Freedom of the Will, xi, 14) Edwards consistently subscribed to a unitary view of the whole person.

This holistic anthropology began with the idea of complete redemption: head to toe, heart to mind. “They are totally corrupt in every part, in all their faculties; in all the principles of their nature, their understandings, and wills; and in all their dispositions and affections. Their heads, their hearts, are totally depraved; all the members of their bodies are only instruments of sin; and all their senses, seeing, hearing, tasting, etc. are only inlets and outlets of sin, channels of corruption.” (WJE 1:670 “Justice of God in the Damnation of Sinners”) 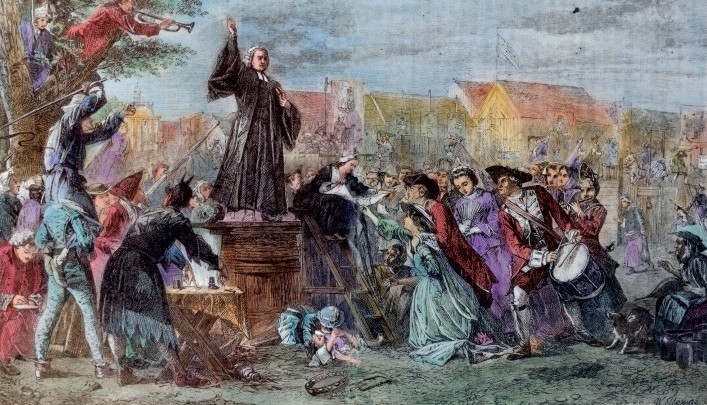 Edwards, though, was careful not to delineate the faculties or “offices” in degrees of importance. Contrary to Ola Winslow’s presentation of Edwards, the theologian did not ascribe levels of significance in the human powers involved in the act of faith. While Edwards clearly believed in distinct functions of the mind and will in the process of conversion, his holistic understanding of the human soul advocated a unity of the faculties. By “soul”, “Edwards meant the confluence of two faculties – the ‘understanding’ that perceives and judges, and the ‘inclination or will’ that moves the human self toward or away from things in liking and disliking, loving and hating, approving and rejecting.” (The Theology of Jonathan Edwards, 312)

If the entire human soul were a fire, the will and understanding were its heat and light. Edwards perceived them both as essential. Men such as Charles Chauncy (rationalist) and James Davenport (“enthusiast”) spotlighted one and eclipsed the other, but this was a fallacy Edwards took pains to avoid. Reason and emotion were both worthy faculties, neither designed to compromise the other. In fact, according to Edwards, understanding and will were the highest kind of created existence. (WJE 1:104, “The End for which God Created the World”) Intellectualism and fanaticism were but one-sided movements that Edwards eschewed in favor of a true, robust conversion experience. Unfortunately, McClymond and McDermott find that among Edwards’ contemporaries, few grasped the subtlety of his position. (313)

Edwards’ nuanced view, however, demands further examination. While he was careful not to attribute more importance to one faculty over another, he did recognize the preeminence of the understanding. For Edwards, like Calvin before him, there was a necessary distinction to make regarding kinds of knowledge. The first was merely “notional” or “rational.” Cognitive understanding of the Gospel truths consisted of the grasping of ideas, knowledge that is “very dim and transient.” (WJE 18:458) The second kind of knowledge consisted of something called a “sense,” an apprehension and contemplation of Gospel truths located in that part of the will “figuratively called the heart.” (18:456) This was an internal experience with that which was not known. The mind and affections became convinced of a biblical composition and the soul affirmed it. Edwards knew these events from his own life.

In his Personal Narrative, Edwards gives an account of what took place in 1721 as he experienced his own sincere conversion: “The first instance that I remember of that sort of inward, sweet delight in God and divine things that I have lived much in since, was on reading those words [1 Tim. 1:17] “Now unto the King eternal, immortal, invisible, the only wise God, be honor and glory for ever and ever, Amen.’ As I read the words, there came into my soul, and was as it were diffused through it, as sense of the glory of the Divine Being; a new sense, quite different from any thing I ever experienced before. Never any words of scripture seemed to me as these words did. I thought with myself, how excellent a Being that was, and how happy I should be, if I might enjoy that God, and be rapt up in him in heaven, and be as it were swallowed up in him for ever!”  This “new sort of affection” overwhelmed him with an inward, sweet sense of the things of God.

No doubt aided by his own conversion experience, one of Edwards’ favorite analogies to the salvation event was that of light, often using the imagery of 2 Corinthians 4. Illumination belonged to the supernatural work of the Spirit. Edwards often compared the second kind of knowledge to a blind person seeing colors for the first time – without having any previous idea of beauty. Spiritual sight had been granted him. Such he understood to be absolutely necessary in the preaching of the Gospel. Without an appreciation of this inward “sense of divine things” in Edwards, George Marsden suggests it is impossible for any reader to make sense of Edwards. (Jonathan Edwards, 44)

Yale Philosopher John E. Smith observed that all of Jonathan Edwards’ thought could be considered “one magnificent answer” to the question “What is true religion?” (“Editor’s Introduction” WJE 2:2) Affections were inevitably involved in any attempt to define that religion, and his Religious Affections is the most comprehensive attempt to do precisely that. For the preacher at Northampton, affections were the “springs of motion” that propelled human activity. Without the affections, life itself would all but cease: “Such is man’s nature, that he is very inactive, any otherwise than he is influenced by some affection, either love or hatred, desire, hope, fear or some other. These affections we see to be the springs that set men agoing, in all the affairs of life, and engage them in all their pursuits…take away all their love and hatred, all hope and fear, all anger, zeal, and affectionate desire, and the world would be, in a great measure, motionless and dead, there would be no such thing as activity amongst mankind, or any earnest pursuit whatsoever…so in religious matters, the spring of their actions are very much religious affections.” (WJE 2:101) Edwards’ fullest display of human psychology comes in a work completely dedicated to the religious affections.

John H. Ball III compares Edwards and Hooker – both Connecticut River Puritans – in their respective conversion psychologies: “Jonathan Edwards, especially with his respective studies of the affections and the will, becomes another touchstone within the Reformed tradition by which to evaluate the views of Hooker as to cognition and volition. It has been shown that Hooker, whose morphology in some ways paralleled the outlines of faculty psychology, nevertheless radically departed from that understanding at its very fountainhead.” (Chronicling the Soul’s Windings, 92) As a result of their differing perspectives regarding the faculty psychology of the soul, their respective preaching styles and views on conversion were divergent as well. Stressing clear voluntarism, Hooker employed the use of the moral law emphatically in order to appeal to the will of the believer. Hooker’s sermons were imbued with exhortation. Conversely, his Puritan descendant a century later engaged in prolonged instances of illustration and vivid imagery in order to capture the mind and understanding of basic Gospel truths. Edwards’ most famous sermon, Sinners in the Hands of an Angry God (1741), is evidence of his illustrative homiletics and mind-centered psychology. His graphic imagery of Hell’s fury and the sinner’s precarious position dangling like a spider over the pit of eternal torment are testaments to the preeminence of the mind in grasping Gospel truths and motivating the will.

The conversion morphology that Edwards inherited was preparationism – the notion that a sinner was called to actively “prepare” his heart before conversion could take place. However, as Ball states, “A century later, Edwards perceived that Arminian sentiments had by then arisen from excessive voluntarism. He therefore could not adopt wholeheartedly the preparationism of the Hooker-Shephard sort.” (Chronicling the Soul’s Windings, 257)

Despite their divergent faculty psychologies and distinct conversion morphologies, both Edwards and Hooker captured the Puritan fixation with conversion. Edwards himself once boasted that the work of God in the conversion of one soul was more glorious than His work in the creation of the entire material universe. How that conversion occurred, however, became the point of bifurcation between the two post-Reformation Calvinists. Different emphases within covenant theology precipitated different emphases within faculty psychology. These in turn led to differing perspectives of conversion. For Edwards, a one-size-fits-all pattern of conversion was more than an issue of procedure. And the debate between the preeminence of the mind or the will was more than psychology. What lay at the bottom of it all was the quest to take the precious gems of the Reformation and deliver them pastorally in the salvation of sinners. In that regard, Edwards carried the heavy mantle that Hooker passed on.

« Dear Graduates…
The Philosophy of Marxism. »