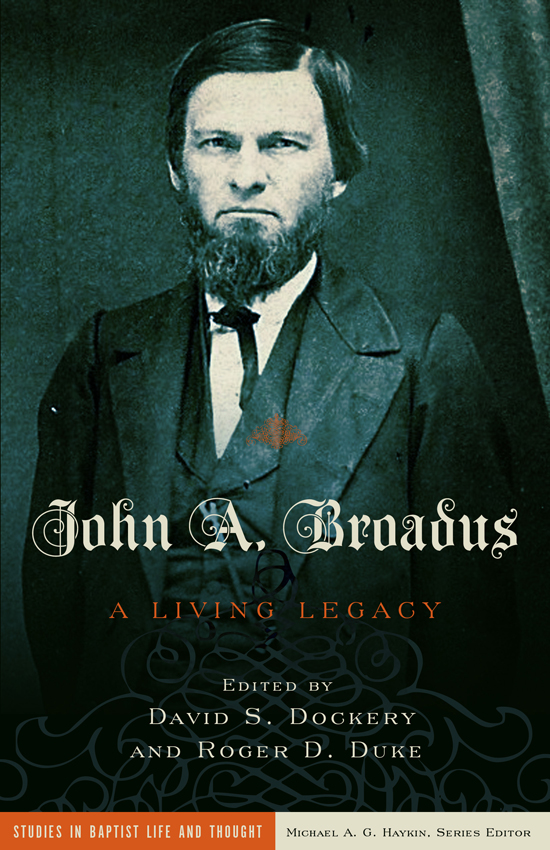 Baptists need a history lesson. Or two. As Michael Haykin (Southern Baptist Theological Seminary) keenly observes, “Baptists are being tempted to divorce themselves from their theological and spiritual roots.” (viii) With Haykin as its editor, the series “Studies in Baptist Life and Thought” attempts to unify past and present. I recently had the pleasure of reading one of theses studies: John A. Broadus: A Living Legacy, a work edited by David Dockery and Roger Duke. (Union University) The 10 authors contained in this work (1) effectively place Broadus in his 19th century denominational, national, and international setting, and (2) offer him as a guide to modern preaching. 120 years after his death, the second president of the Southern Baptist Theological Seminary still has much to offer the next generation of preachers.

In 1861, at the outbreak of the Civil War, Confederate General Stonewall Jackson wrote to one of Broadus’ friends in order to plead for his services: “Beg him to come. Tell him that he never had a better opportunity of preaching the gospel than he would have right now in these camps.” (137) The first Southern Baptist New Testament professor would eventually become a chaplain in General Robert E. Lee’s army until the end of the war. And once the war ended, he returned to the classroom in Greenville, South Carolina. When classes began again on November 1, 1865, only 7 students enrolled. In Broadus’ homiletics (preaching) class, only one student sat in his classroom. One. And he was blind. However, Broadus’ didactic spirit was undeterred. From his notes that semester, Broadus would compose one of the most famous preaching books in the history of the church: On the Preparation and Delivery of Sermons (1870). Of the man who once believed he was unfit for public speech, Charles H. Spurgeon said, “I was delighted to see Dr. J.A. Broadus. His book is invaluable.” (196)

A.T. Robertson, Broadus’ son-in-law, biographer, protégé, and “considered by many to be the finest scholar in Southern Baptist history,” (x) captured Broadus’ unrelenting passion to teach: “In homiletics Doctor Broadus had only one student, and he was blind. But it was like Doctor Broadus to give this one blind student the best he had.” (177) The second president of the Southern Baptist Seminary was a model not simply for his preaching style, but for the compassion and purpose with which he carried his ministry. His departure from Charlottesville, Virginia, where he’d become a pastor at the First Baptist Church and a Greek professor at the University of Virginia, had been difficult. However, Broadus found conviction in helping to plan and found the first Southern Baptist seminary. For years, he and president James Boyce were preachers, teachers, and fund-raisers – striving to keep the upstart seminary afloat amidst state rivalries and prejudices. Moreover, Broadus led the planning committee for the inaugural school as well as its transition to Louisville, KY in 1877.

For Broadus, attendance and finances were by no means indications of success in the ministry of Christ. Despite enrollment problems in the early years of the Seminary, Broadus stayed the course. Schools like Brown University, Crozer Seminary, Richmond College, University of Chicago, Vassar University and Newton Theological Seminary all requested Broadus as their president or department head. “Yet none could persuade him to abdicate his responsibilities to Southern.” (149) In fact, in 1889 when the board of trustees unanimously elected Broadus as the second president of the Southern Baptist Theological Seminary, they added $500 to his salary for a grand total of $3,000 – a total that could easily have been overshadowed at other institutions. For Broadus, it wasn’t about the money. It was about erecting an institution that would stand as the mother seminary for the largest Protestant denomination in the world. Of the four founding faculty members, Broadus’ tenure was the longest, as he “established himself as the quintessential embodiment of the Seminary’s high ideals of scholarship, piety, and service.” (151-152) According to Richard Melick, “He was the ideal scholar-preacher.” (100) In a century that included preachers like Spurgeon and revivalists like Moody and Finney, Broadus was emerging as a household name in Baptist circles.

However, it was Broadus’s methodology for preaching that lay at the center of his legacy. Today, Broadus has been called “the Prince of Expositors.” (201) In fact, as Thomas J. Nettles (Southern Baptist Theological Seminary) points out, Broadus had tremendous influence upon modern preachers like John MacArthur. In a 1992 book written by the Master’s Seminary faculty, MacArthur cites Broadus’s On the Preparation and Delivery of Sermons as the first important influence on his concepts as a biblical expositor. (Rediscovering Expository Preaching) “A remarkable element of many of the recent evangelical books on preaching was the revitalization of appreciation for Broadus and even immediate dependence on his ideas.” (201) Bryan Chapell, in his famous Christ-Centered Preaching, calls John A. Broadus “the father of modern expositional preaching.” (205) Broadus was an advocate not simply of exposition, but of lectio continua, the art of consecutively preaching through the same book of the Bible, beginning to end. (As I would recommend!)

Broadus’s style differed somewhat from the Puritanical dictation of the century earlier. Rather than reading from a manuscript, Broadus championed “extemporaneous preaching” that involved heavy preparation followed by a simple sketched outline (if any notes at all) behind the pulpit. As Mark Overstreet notes, “Broadus drove the preacher to embrace extemporaneous preaching. They must learn to trust themselves, he argued.” (169) This free style, while fitting for Broadus, severely hindered historians from gathering his writings. Through the work of David Dockery, many of Broadus’s notes have been recovered from his famous 1889 Lyman Beecher Lectures on Preaching at Yale Divinity School. “The lectures marked the crest of more than 40 years experience as a preacher and 30 years as a professor of homiletics.” (159) As a classicist, Broadus learned from greats like Aristotle and Cicero while holding to a fluid, clear style. Perspicuity was important for Broadus. Even in his erudition, he spoke the language of common Baptists. The son of a farmer grew up in an era following the second Great Awakening where many Baptist preachers were hesitant to imitate the ‘sensationalism’ of many camp meetings. However, Broadus stayed true to his own personal style: an ardent devotion to Scripture with an unashamedly emotional appeal, all without the hindrance of notes. Broadus thought of preaching as explanation. Likening their ministry to that of Apollos, he exhorted his homiletics class to be “Mighty in the Scriptures.”

During his lifetime, John Broadus baptized the likes of Charlotte “Lottie” Moon and dismissed his best friend Crawford H. Toy from the faculty of Southern Seminary as the institution’s first casualty of liberalism. In it all, Broadus’ dedication to the cause of Christ informed and yet outweighed every human endeavor. During Southern Seminary’s initial years, the question of its future still loomed. Still, Broadus’s words reveal his unwavering spirit and passion for Christian education: “The seminary may die, but let us die first.” On the day of his death in 1895, the Louisville Courier-Journal reported, “There is no man in the United States whose passing would cause more widespread sorrow than that of Doctor Broadus.” (21) Thankfully, the legacy of John A. Broadus lives on in the faithful, biblical, expositional preaching that enjoys a quiet resurgence in Baptist pulpits in today’s generation. It’s my prayer that this legacy continues. Moving forward means learning from our past.