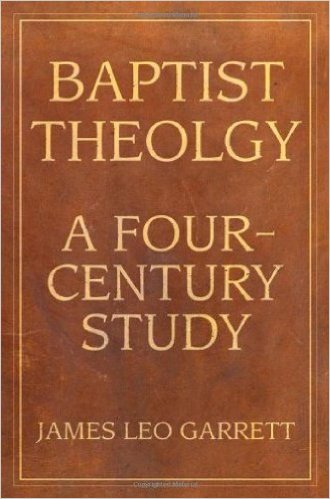 James Leo Garrett, Jr. is a Baptist theologian. (Ph.D., Harvard) Garrett, the son of a business teacher at Baylor University, currently holds the position of distinguished professor emeritus of theology at Southwestern Baptist Theological Seminary in Fort Worth, Texas. Among his numerous other books and articles are his two-volume Systematic Theology (1990), Baptist Church Discipline (1962), Baptists and Roman Catholicism (1965), We Baptists (1999), and Are Southern Baptists Evangelicals? (1982). This particular work is entitled Baptist Theology: A Four-Century Study (2009), a historical and thematic survey of Baptist doctrine as represented in Baptist confessions of faith, the teachings of major Baptist theologians, and Baptist movements and controversies. Locating the first Baptist congregation in 1609, Garrett traces four centuries of their legacy and faith.

The Southwestern professor begins the study by examining the ancient creeds. In doing so, the author explicitly challenges the notion that Baptists held to a creedless faith, instead demonstrating their “indebtedness” to, for example, Chalcedonian Christology. Early in the work, Garrett also addresses the issue of Protestant heritage. The author suggests, “the matrix of the Baptist movement had been powerfully shaped by the Protestant Reformation.” (7) This “matrix” was also heavily influenced by the Anabaptist and Mennonite traditions, reflected in documents like the Schleitheim Articles and the Waterland Confession, creeds specifying believer’s baptism. Baptist “distinctives” like congregational polity can be traced back to confessions from Thomas Helwys. The royal priesthood of Christians, according to Garrett, came to Baptists through separatism. Dortian Particular Baptists were derived from Independency. Hence Garrett sees Baptist identity flowing from multiple sources. The evolution of Smyth’s theology evidences many of the General Baptist emphases: general atonement, liberty of conscience, believer’s baptism, and immersion. Ultimately, however, Garrett locates a trajectory to Unitarianism in Matthew Caffyn’s “celestial flesh,” derived in Hoffmanite Christology. The first London Baptist confession (1644, 1646), described as “moderately Calvinistic,” (56) was the first confession to prescribe a single immersion. As Baptistic doctrine developed, so did ecclesiology and membership. This issue is evidenced in the dialectic between William Kiffin (close communion) and John Bunyan (open communion). With the return of Charles II, England witnessed the unification of Dissenters. This gave opportunity for the second London confession (1677), a more Calvinistic document modified from the Westminster Confession. Just as General Baptists had been led to Unitarianism, Garrett also narrates the danger faced by Particular Baptists in Hyper-Calvinism. The author locates John Skepp as the earliest Hyper-Calvinist Baptist, accompanied by the likes of John Brine and John Gill. However Garrett also spends considerable time presenting Gill as an apt Trinitarian theologian – the first Baptist to write a verse-by-verse commentary on the whole Bible. Across the Atlantic, a nascent Baptist theology found expression in the life and writings of Roger Williams, a “thoroughly separatist” Dortian Calvinist who was the first to articulate the liberty of conscience. (109, 113) On the other hand, Benjamin Randall established the first Free Will Baptist church in New England. It was a General Baptist by the name of Elhanan Winchester who became the first to preach universalism in the Baptist realm. Garrett juxtaposes this “general” temper against the Calvinistic soteriology of Southern theologians like John Leadley Dagg and James Petigru Boyce, men who espoused a “plenary” view of inspiration, federal headship view of Adamic sin, and a limited extent of the atonement. The “Abstract of Principles” at the Southern Baptist Theological Seminary, as drafted by Basil Manly, Jr., is “moderately Calvinistic.” (147)

As a product of the Great Awakening, Separate Baptists emerged from the Separate Congregational churches in New England that had traditionally held to the Halfway Covenant. Their acceptance of pedobaptism had led men like Isaac Backus to depart for the Separate Baptist church. Backus himself fought for tax exemptions, liberty of conscience, and disestablishment. While John Leland was also an advocate of the freedom of the conscience, Garrett finds him to be more “Jeffersonian” in his church-state theology. Across the Atlantic, the incipient modern missionary movement found seminal expression in Robert Hall’s Help to Zion’s Travellers. (1781) Together with the “evangelical catholicity” of men like John Sutcliff, missionaries like William Carey breathed new meaning into the Great Commission text. Garrett spends considerable space examining the thought of Andrew Fuller, an “evangelical Calvinist” and author of The Gospel Worthy of All Acceptation (1785) who contended with Sandemanianism and McLeanian baptism. Primitive Baptists were wary of Fuller and Carey’s missional theology, suspicious of Arminianism, and reluctant to frame new confessions of faith. (212) Landmarkism, on the other hand, emerged in the nineteenth century through men like James Graves in reaction to “alien immersions” and invitations to pedobaptist ministers preaching in Baptist pulpits. In response, Baptist church succession was a Landmark staple. The issue of immersion again became an issue at the turn of the century when Southern Baptist Theological Seminary president William Whitsitt dated the recovery of immersion in 1641 (a notion commonly held today ironically). As his assertion countered certain secessionist beliefs, Landmarkists called and eventually achieved Whitsitt’s resignation. Men like John Dagg, on the other hand, eschewed Landmarkist ecclesiology by distinguishing between the “universal” church and local Baptist church. Nevertheless, just as Alexander Campbell’s influence upon Baptists can still be felt in anti-creedal sentiments, Landmarkist influences are still extant in many churches that reject open membership (contrary to John Piper).

Garrett documents other key Baptist controversies such as C.H. Toy’s rejection of traditional views of inspiration at Southern Baptist Theological Seminary and the Down Grade Controversy with Charles Haddon Spurgeon and John Clifford. Such conflicts were manifestations of changing Baptist theology in the direction of Darwinian evolution, historical criticism, and Scottish commonsense realism. (278-279) Men like A.H. Strong and E.Y. Mullins exemplified the precarious interaction between fundamental orthodoxy and liberal thought, embracing theistic evolution and figurative interpretations of Genesis alongside at least semi-traditional notions of original sin. Strong’s “ethical monism” and Mullins’ “personalism” were essentially the same doctrine according to Garrett. (295, 417) The author spends considerable time examining the thought of the latter, identifying him as the twentieth-century bridge between the budding evangelical liberalism and many of the Baptist evangelical-liberal theologians. Men like William Newton Clarke and his pupil Harry Emerson Fosdick were also significant in this transition. For Mullins, his foundation was religious experience. According to Garrett, “only on the nature of repentance and faith and on perseverance could Mullins pass muster.” (431) The 1925 Baptist Faith and Message Statement, a revision of the 1853 edition of the New Hampshire confession, was written precisely to stymie the tide that Mullins and his Schleiermacher-esque counterparts ushered into Southern Baptist life. Unfortunately, the “Mullins committee” saw that the confession was still pregnant with modern rhetoric, residual effects of liberalism that would linger slightly in the 1963 confession (with the oversight of Herschel Hobbs, influenced heavily by E.Y. Mullins). However, Garrett recognizes the 1963 statement as “the rallying point for resistance to alleged theological liberalism.” (491) Years later in the Baptist Faith and Message 2000 the definition of the Bible as God’s Word would no longer be as a “record” of divine revelation, but simply as divine revelation itself. The Ralph Elliott controversy was also indicative of the liberalism endemic in Baptist academia, as Elliott was forced to resign over his “symbolical” interpretation of Genesis 1-11.

Contrary to Elliott, well-known Dallas preacher W.A. Criswell valued the historicity of the Bible so much that he preached through the entire Bible in seventeen and a half years! Holding to a “dynamic, plenary, verbal, supernatural” theory of inspiration, Criswell was a “major shaper of the Southern Baptist ‘conservative resurgence’ at the end of the twentieth century.” (482,483) Harold Lindsell’s The Battle for the Bible was a key piece of literature in the movement, espousing a “domino theory” of biblical infallibility – once inerrancy is given up, the road to liberalism is paved wide open. (492) The election of Adrian Rogers as president of the Southern Baptist Convention in Houston in 1979 was the formal beginning of the so-called “conservative resurgence”     On the other side of the issue, the “principal theologian of the CBF” Walter Shurden fixed the concept of freedom at the center of his theology, not only to advocate religious liberty but to emancipate himself from creeds of any kind. (500) The fundamentalist-modernist controversy of old was shrugged off by men like Carl F.H. Henry who indicted fundamentalism for its lack of social graces, kingdom preaching, and anti-intellectualism (The Uneasy Conscience of Modern Fundamentalism, 1947). (516) Contrary to Neo-Orthodoxy, this new “Neo-Evangelicalism” saw the Bible as the authoritative form of revelation. Although seventeenth and eighteenth century Baptists did not explicitly document Baptist “distinctives” in the modern sense, contemporary Baptists discovered a new interest in this area. Garrett locates the “primary” Baptist distinctive in “the authority of the Bible or the New Testament.” (532) Garrett himself authored another work which he documents in this book called Are Southern Baptists Evangelicals? (1982) centered around this exact issue. The author answers the question in the affirmative, calling Baptists “denominational Evangelicals.” (535) This logocentric faith characteristic of evangelicalism contrasted sharply with the social theology of modernist advocates like Shailer Matthews. On both sides of the issue, and especially in the fundamentalist camp, the dispensationalist teachings of John Nelson Darby pervaded American evangelicals in the twentieth century. Garrett, while acknowledging the modernist leanings of the twentieth century, also recognizes the nineteenth century as the “great century” in Christian missions. (581) It was a century that also featured the populist evangelism of William Franklin Graham, Jr., also known as “Billy.” With the emphasis of sin and the role of the Spirit in his preaching, Graham found Dortian Calvinism almost irrelevant in his ministry, despite his Presbyterian upbringing. (605) Garrett also looks at other countries worldwide in an exposition of international Christianity.

In his last chapter, Garrett examines those new Baptist theologians who sit appreciatively on the heels of spiritual giants. For example, the author depicts pastor and professor John Piper as someone preeminently “shaped and influenced by the life and writings of Jonathan Edwards.” (661) Piper’s “Bunyan heritage” with open communion and his emphasis upon sola Scriptura place him in multiple streams of Baptist history. In addition, professor and historical theologian at Southern Baptist Theological Seminary Tom Nettles is identified as a figure not settled with the mere recovery of scriptural inerrancy. His Dortian Calvinism is representative of many contemporary Baptists who hold to the domino theory, namely, that if the classic Calvinistic doctrines are not upheld, process theology will inevitably ensue. (668) Moreover, other Baptist theologians reject the modern Calvinist acrostic “TULIP” for a more historic lineage of Calvinism. For example, Timothy George replaces “TULIP” with “ROSES” in a brand of historic Calvinism he identifies more with William Carey and Charles Spurgeon. Garrett concludes his book with much of the same themes that pervade the work: creeds, Calvinism, controversies, and baptism itself. In the end, Garrett offers a question: “whether Baptists hold to and clearly affirm and practice their distinctives.” (725-726) Charles Spurgeon thought that perhaps its was simply immersion. Garrett has written an excellent historical theology that allows us to answer the question for ourselves.