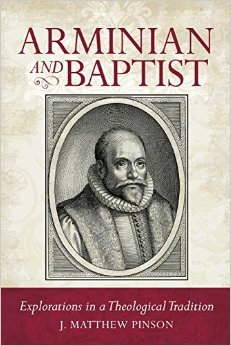 In his book Arminian and Baptist (2015), J. Matthew Pinson offers his readers the premise that Reformed Arminianism has been seriously misunderstood from both sides of the theological aisle. Unlike the majority of Arminianism, traditional Reformed Arminianism (as represented by seventeenth-century General Baptists and almost exclusively today by General Free-Will Baptists) posits a notion of original sin, radical depravity, and the necessity for penal satisfactory atonement. Pinson begins the book with a brief look into the life and thought of Jacobus Arminius himself, who, according to Pinson, was not a synergistic semi-Pelagian as many assume. Still, despite his “high regard” for Calvin, Arminius diverged with the Magisterial Reformer in the particulars of predestination and the resistibility of grace. For Arminius, predestination was not an essential core of Reformed theology, and the decrees of infra- and supralapsarianism were not rooted in the mediatorial work of Christ. (11) His definition of libertarian free will espoused freedom from necessity, not from sin. Therefore, according to Pinson, Arminius adhered to a “thoroughly Augustinian” doctrine of original sin – one with two deaths: physical and spiritual. (19) Human ability was solely predicated upon the grace of God that gave the power to come to Him. However, “Arminius differed from Calvin and many Reformed theologians of his day by stating that this grace of God ‘which has appeared to all men’ can be resisted. Arminius denied the distinction between a universal and a special call.” (22) Justification was forensic, but while Christ’s righteousness was imputed, so was faith itself.

Arminius rooted the atonement in the priesthood of Christ, which included two “sacerdotal functions”: oblation and intercession. God’s justice is a significant theme in Arminius’s theology. Consequently, the concept of reprobation was wholly rejected and a penal satisfaction theory upheld. As a result, Pinson identifies Thomas Helwys in this same strand of Reformed Arminian thought. While both Helwys and John Smyth rejected the concepts of limited atonement, unconditional election, and irresistible grace, it was Helwys alone who held to an Augustinian view of original sin, sola fide, and solo Christo. (67) This included the Augustinian/Traducian notion of the soul’s origin and the fact that, as Adam’s progeny, all sinned in Adam. According to Pinson (who supplies no proof), Arminius influenced Helwys in this belief. Along with Arminius, Helwys also rejected the classic notion of “free” will, instead insisting upon freedom from necessity, not sin itself. On the other hand, Smyth’s exposure to the Waterlander Mennonites brought him to a bipartite justification that rejected an exclusively imputative atonement. (76)

Helwys, the father of the English Baptist movement, offered his most biting critique of Reformed theology in the form of general redemption. Furthermore, “Citing Romans 5:12,18, Helwys insisted that sin is the cause of condemnation, not God’s decretive will.” (87) Therefore both single and double reprobation were rejected. Like Arminius, Helwys adhered to a natural headship view of sin’s transmission. Both men also believed in infant salvation through general redemption. Helwys makes a case for the latter in the protoeuangelion of Genesis 3:15. “Adamic unity” ensures that the promise was made to the entire human race, and therefore particular redemption, in his mind, was nullified. (95-96) As a result, Pinson can conclude with confidence that “Helwys, the first Baptist, was Arminian.” (99) A man who also embodied this brand of Arminian Baptist theology was Thomas Grantham, someone Pinson calls its “quintessential representative.” (101) However, though he only affirmed total depravity in the 5-point Calvinist scheme, Grantham also departed significantly with his 17th century Arminian counterparts. Grantham affirmed a penal satisfaction theory of the atonement in the form of both active and passive obedience on the part of Christ, vehemently rejecting the moral influence theory. In contrast, John Goodwin rejected the idea of imputed righteousness, instead proposing that the “reason for Christ’s coming was so God could dispense with His law.” (117) Goodwin’s governmental view of the atonement portrayed God as a moral Ruler instead of a divine Judge presiding over the cosmos.

Grantham and Goodwin represented two streams of Arminian Baptist soteriology, especially in regards to apostasy. According to Grantham, falling from grace was an “irrecoverable Estate,” a “reversal of the ordo salutis” epitomized in the fourth, sixth, and tenth chapters of Hebrews. (120) Therefore Grantham rejected the doctrine of “repeated regeneration.” In contrast, Goodwin believed that apostasy was a “remediable state.” (121)

Chapter six highlights the theology of Pinson’s last Arminian figure: John Wesley. As a so-called “folk-theologian,” Wesley is difficult to categorize. For this reason, the author is skeptical of any school of thought that would place the evangelist under a sole religious influence (e.g. Catholic, Anglican, Calvinist). Instead, Pinson elects to present Wesley’s “eclecticism” that made him so unique within the course of Reformed and Arminian history. (133) Wesley’s “basic, though modified, penal satisfaction theory of atonement” showed influences of John Goodwin and Richard Baxter, retaining the notion of Christ’s passive obedience but dispensing with His active obedience. As a result, Wesley’s theory of the atonement covered only past sins. Like Arminius and Grantham before him, Wesley upheld the notion of God as Judge. However, his view of justification combined both penal satisfaction and moral government. Therefore the righteousness of Christ was not imputed, but practical and inherent. (144) Wesley believed in two kinds of apostasy: (1) irremediable (e.g. 1 Tim. 1:19-20, Heb. 6:4-6) and (2) willful sin. While the first is “total apostasy”, the second is dictated by Wesley’s futuristic view of justification. Failure to receive pardon for post-conversion sins results in apostasy, but this “backsliding” is remediable. Pinson suggests that Wesley’s “modified penal satisfaction theory of atonement, which entails that Christ atoned only for the believer’s past sins, is a distinctive contribution to Western Christian thought.” (147) His emphasis upon a second work of grace and “Christian perfection” is also a distinctive.

Pinson concludes his book with the topic of confessions. Like Timothy George, Pinson distinguishes free church confessionalism from “creedalism” – something that Baptists have never advocated. While the words “Baptists” and “confessional” may seem antonymic, Pinson suggests they’re quite compatible. The author rejects the false dichotomy of “Finnyesque” Holiness pietism and Puritan confessionalism, instead pointing to the “task at hand” for contemporary Arminian Baptists “to re-connect with their past” in appropriating consensual creedal orthodoxy with pious revivalism. (173)

Despite my own theological convictions, my love of historical theology and my relatively novice understanding of the nuances of Arminianism led me to very much enjoy this book. Pinson, president of Welch College (Nashville, TN), does an admirable job of tracing a specific strand of Reformed Arminian thought and its hybrids through the centuries. Still, as a Free Will Baptist himself, Pinson’s presuppositions are obvious. This is why he emphasizes so adamantly the seminal line between the lionized theology of Jacobus Arminius and his own denomination. In his view, the Free Will Baptists are the only remaining “progeny” of seventeenth-century English General Baptists like Thomas Grantham. While his incisive look into the thought of these Arminians is skillful, he makes basic assumptions of Arminius’ influence that even Pinson admits cannot be proved! (71) This of course colors the way in which the author views the Helwys-Smyth split, which Pinson concedes was about far more than soteriology (e.g. Hoffmanite Christology, succession, magistracy) This book’s strength is its detailed examination of the nuances of Arminian thought. However, its weakness is its failure to provide a concrete link between the thought of Jacobus Arminius and that of the seventeenth-century English Baptists. Nevertheless, Arminian and Baptist (2015) is an enjoyable volume that both Arminians and Calvinists should read in order to provide profitable dialogue between both sides of the soteriological aisle.

« J.I. Packer on the Bible vs. Tradition
Gregory of Nyssa on the Life of Virtue »